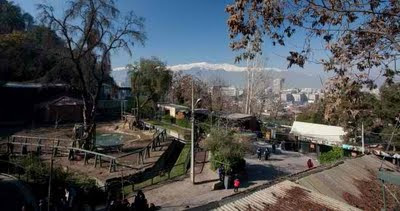 Santiago Zoo, 2010. The upgraded elephant enclosure can be seen at the left.
Photo Courtesy of ThisIsChile.com
Elephant.se previously only displayed two unknown female African elephants at the Jardin Zoologico Nacional de Chile, or the Chile National Zoo in Santiago.

With research performed by ShowMe Elephants, the database has now been updated with more information regarding the zoo's pair of African elephants, Jumbo and Protea. Two past elephants residing at the zoo also have been identified. More details regarding these four animals' history are still sought.

Jumbo and Protea arrived together to Chile in January 1996 as gifts from the government of South Africa. They replaced the zoo's first elephant Fresia. Fresia was acquired from the Rio de Janeiro Zoo in Buenos Aires, Argentina, in 1940. The Asian elephant died 51 years later in May 1991 of a heart attack; efforts to raise her to her feet were unsuccessful.

An African elephant (name, sex and origin unknown) succumbed in the 1990s after several surgeries performed to remove trash and other debris from its stomach.

It is interesting to note the Santiago Zoo's official website gives the wrong classifcation information for the African elephant. It is listed as Order Artiodactyla and Family Hippopotamidae, rather than Order Proboscidea and Family Elephantidea. 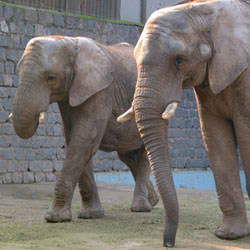 Update 05/03/2011
"On Showmeelephants, Radar ponders who was responsible for listing the African Elephants on the Santiago Zoo's official web site as Order Artiodactyla and Family Hippopotamidae, rather than Order Proboscidea and Family Elephantidea. I am not sure but probably the same person who decided that "mint" was a more natural color for the horrid elephant building then the mud brown color(they need to dump a pile of rubble on top of it, ala Brookfield.) Probably also the same person who said, "let's try to think of a new, never before used elephant name this time. I know, how about Jumbo?" //Wade Burck

Photos of the elephants and exhibit are also available at the following link.