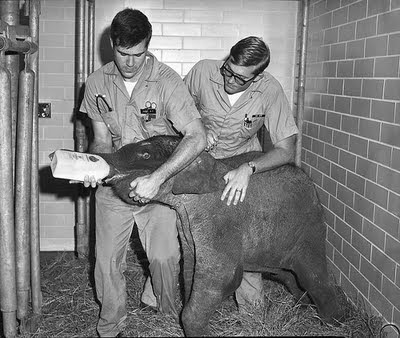 Sunday, May 1, 2011
Elephant calf being fed at the vet school - 1968
I am assuming this is Portland Zoo's Droopy born Sept. 29, 1968, and died Oct. 4, 1968.
Posted by Wade G. Burck
Droopy was the seventh calf born to the Portland Zoo's breeding herd of Asian elephants, sired by Thonglaw and born to first time mother Effie. The female calf only survived for five days before her death.

Droopy's dam Effie was listed in previous versions of the North American Regional Studbook for the Asian Elephant as "Lost to Follow-up" and differentiated as two separate elephants. This is in part due to a name change from 'Effie' to 'Sue.' An incorrect arrival date to Busch Gardens Tampa from the Portland Zoo precedes Effie's "Lost to Follow-up" status. The second entry for this same animal lists the correct date for Sue's arrival to Busch Gardens Tampa from an unknown location and her death in June 1985. Sue is listed with Temporary Studbook Number T1368. The 2010 Edition of the studbook merges these two animals. After her purchase by Busch Gardens, Effie was relocated to Texas a year prior to Busch Gardens Houston's May 1971 opening. The park closed less than two years later, prompting her transfer to the Tampa facility with three other female Asian elephants, Kaba, Tina and Mem. All four elephants remained in Florida until their deaths except Tina, still living and one of five members in the park's herd.

At Busch Gardens Tampa, Ellie resided with another elephant from the Portland Zoo breeding program. Emma (also listed as M&M) was born into Portland's Asian elephant herd in October 1973, sired by Vance and the fourth calf for dam Rosy. Within a year of her successful birth, Emma was sold to the San Jose Zoo. This transaction perhaps took place as brokered by Texas facility Vivo Animales. The 2010 Edition of the studbook adds this location in her history between Oregon and California. More information is sought regarding this location in Lorena, Texas.

A reference has been found regarding a fire at a zoo in San Jose that killed an elephant calf in the 1970s. More information is sought regarding this animal, unlisted in the studbook.

Emma / M&M reveals another update in the 2010 Edition of the North American Regional Studbook for the Asian Elephants. Previous versions list her with an alternate name 'Satchmo.' The 2010 Update adds Satchmo as a new elephant, SB 698, a year old male Asian elephant first arriving to Vivo Animales and transferred to Busch Gardens Tampa in July 1975 with Emma. He died the following month.